I hope everyone had a lovely holiday season!  Ours was wonderful, full of family and friends, parties and quite reflection.  Of course, as usual, I am glad it is over and we can back to our work. 🙂

Today I want to share some tattoo pictures with you.  First of all, I want to introduce you to Thom. Thom is our first controllable character and he is running around the terrain checking things out. 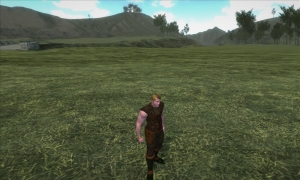 He left the valley and visited the high forests. While there, he ran into a Dalmite woman.

She seemed friendly enough, not armed, and not even really clothed. But she did display some lovely tattoos. By the way, the underwear is a stand in for some Dalmite-appropriate clothing, which hopefully will come soon.  I needed something that would show off the tattoos and not cover them and the underwear, which is a simple overlay was available.

These particular tattoos are simple examples of what we plan to do. 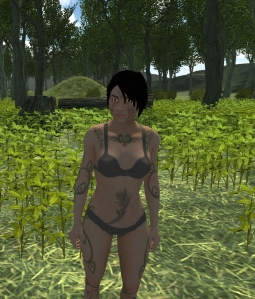 Dalmites display tattoos that identify their patron god/goddess, their tribe and their clan. They also use the tattoos to hide better in the woods by creating lovely vertical lines of vines down their arms and legs.  When the Salans encountered their first Dalmites while exploring their new land, they nick named them the Green People, due to their tattoos.

We will be creating tattoos for each of the 5 Dalmite tribes as well as for each of the gods and goddesses. During character creation, if a player chooses a Dalmite they will also choose their god/goddess and their tribe after reading a bit of lore.  Leg and arms vines will also be available and players can choose from several types. Clan tattoos are usually displayed on the outside of the hand.  Dalmites greet each other by holding out their hands, palms up to show they have no weapon and mean no harm. They then turn over their hand to identify their clan. Dalmites without clan tattoos are considered suspicious since clans are a very integral part of a Dalmite’s life.

Clan tattoos will be given out after the player enters the game. This way, players can form their own clans and even design their own tattoos.  Submitted tattoos will then be available to clan members.

We have two artists who will begin the process of improving what you see here and making beautiful custom tattoos. I will post their progress starting this week, hopefully.

In the meantime, our programmers have also been hard at work.

Ryan has been making our skills and an inventory system to go with them. He has added animations to the foraging skill and tomorrow we will tweak our mocap animation for “search” to add to the skill.  Next he will tackle cooking and recipes.

Here is a screenshot of what he is working on. The inventory is currently storing example icons for leaves, berries, kindling, and other foraged items.  He works in a prototype environment, which is faster without all the terrain and fancy lighting. 🙂  Don’t worry, our trees don’t look like that.

Dennis has been working on the foundations of our game. Character creation has been a huge challenge.  The Unity character system is relatively new and not well documented so both he and I have wandered through it for months now and are finally making significant progress. Not only have I gotten tattoos to work (Yay!) but am building a nice bunch of working clothes and hair.  Dennis has the hard part, getting all the bits and pieces to work so that when you log into the game, you can quickly create a unique character and enter the world. 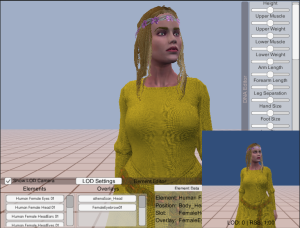 Here is an example of an NPC creator that we will use to build interesting NPCs that can make the world come alive. It looks like Helga, a well endowed Taran maiden is being featured tonight.  Don’t let that beautiful face fool you, Helga is feisty!  The picture in the corner can show us the LOD models for the characters so we can make sure that any decimation of the close up model doesn’t look bad at the viewing distance of the camera. We can also change body and face features to make every character unique. The hair is not my favorite but looks sufficiently scraggly for Helga. We have some that will work much better for your characters, of course. 🙂

Some of the features in the NPC creator will show up in the character creator for the players, such as the body/face sliders. The Character Creator window is much prettier and I will try get a screenshot for my next update if it is ready.

Here is an icon of Helga’s maiden wreath. Icons will be used in our inventory system so you can easily identify what clothing you have and what you would like to put on your character. Tooltips will give you more information about the item, such as a qualitative description of the item and/or it’s use.

Here is another picture of the NPC creator with a different character.

Enough for now but I will try to update when we have something new to show you.  Thanks for stopping by and please feel free to comment. It always helps motivate us to hear from you.

2 Responses to Tattoos and more!