Edit: The screenshots below are from an older version of the game. Please see the newer screenshots.

I have begun construction on the city of Caeril. According to the lore, Caeril is a great city created after a war lasting 100 years devastated the land.  A treaty was signed by all the rulers of the nations and a neutral zone was established. Included within this zone was a large trading city, Caeril. It was built by the people of Aryiure as a monument to peace and prosperity.

Caeril has to be something special. I didn’t want the typical northern European style and since Caeril is on the ocean and the climate is very moderate, I decided to draw from medieval styles in the Mediterranean.  I pulled out pictures from our trip of Venice, Verona, Burano, Dubrovnik, Croatia, and Naplion, Greece. I love the simple style of the buildings in these areas, the roofs covered with tile, the lovely windows, doors, and arches. Piazza’s break up the city allow space for socializing and markets. The cities are colorful and beautiful, all of which seem to suit Caeril very well.

I already new according to our lore Caeril has a canal, tall walls that surround the city, and a docks. After creating the canal, I spent a lot of time placing wall pieces to make it look more like a canal, less like a river. The Central District of Caeril will lie on one side of the canal while enclaves housing various people of each ethnic backgrounds will lie across the bridges. 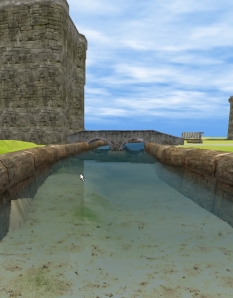 I also created a platform with stairs that go up from the canal and market areas to the Central District of the city where the houses and shops are located.

I also created some concept ‘art’ to show our artists what I would like to see in the city. This picture is of a row of middle class houses.  There are three styles of houses, each one used in a random row. I actually placed two of these back to back in the picture with small gardens between them. I can imagine grander houses on a square courtyard and poorer houses and flats around a small piazza.

These will be passed along to the artists so they can create something similar. They will be used for player housing but I will leave how that will be done for later.

I am hoping that we can make Caeril look magnificent while also making it a playable city. I would very much appreciate your comments on these!